Prince Yemisi Adedoyin Shyllon, hails from Abeokuta, in Ogun State of Nigeria, of the Sogbulu and Ogunfayo lineage of the Laarun royal ruling house of Ake in Egbaland.
He graduated in Engineering from the University of Ibadan (1977), in Law from the University of Lagos (1990) and in the Nigerian law school (1991) with a Masters degree in Business Administration (MBA) from the University of Ife (now Obafemi Awolowo University 1980). He is also a Chartered Stockbroker (FCS) and Fellow of some other  Professional bodies within and outside Nigeria.

In 1981, immediately after obtaining his MBA degree, Prince Shyllon served as the Marketing Research and Market Development Manager and rose in 1983, to become the Marketing Manager of the then exclusive dealer in Caterpillar Machines and equipment in Nigeria, Tractor and Equipment (a division of UACN PLC, Nigerian conglomerate). That same year in 1983, at 31years of age, he was appointed Executive Director (marketing) of Nigerite Ltd (the largest Nigerian building and construction materials manufacturing subsidiary of ETEX global Group of Belgium) and for some years in between, was also the legal adviser of that company. During his years at Nigerite Ltd as Executive Director, he served at various times, as Chairman and Member of many Corporate and Statutory Boards, starting with the Chairman of the Board of Directors of OGBC and OGTV in 1989 at 37 years of age. Thereafter, he was chairman of Raigate Investment Company of Ogun State Government (1994-1996), Chairman of Gateway Tourism Corporation of Ogun State (2003 -2009). He served as member of the Lagos and Ogun states governors transition committees and some other federal and state Governments Statutory Councils. He was also at some time, a Member of the National Think Tank and was the vice chairman of the Ogun State Economic Summit (2004-2010).

Prince Shyllon established the Omooba Yemisi Adedoyin Shyllon Art Foundation (OYASAF) in 2007, which as at 2016, was widely acknowledged and ranked globally, to hold Africa’s largest and most balanced private art collection and one of the one hundred (100) largest private art collectors in the world. 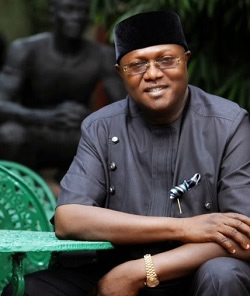 OYASAF selflessly organizes art residency programs for artists, sponsors scholars, curators, artists and art historians from within and outside Nigeria to visit and study his collection, interact with Nigerian art stakeholders and promote research into Nigerian art and culture.
Prince Shyllon, has solely financed the establishment of the First Privately Funded Public Museum of Art in Nigeria, with a grant of one thousand (1000) of his artworks to the Yemisi Shyllon Museum of Art at the Pan Atlantic University (YSMA@PAU), in Lagos. His donated artworks has been agreed to form the main exhibit of that museum.

In 2012, a Professorial chair in visual art was endowed by Prince Shyllon, at the University of Port-Harcourt, Nigeria, with OYASAF as the sole sponsor of the on-line journal of African art, titled, “The OYASAF Journal of Art (TOJA)”, for intellectual discuss of African art and culture. The Yemisi Shyllon Professorial Chair for fine art and design in 2016, sponsored a one week exhibition of the over 2000 years old Chinese sculptures and photo diary of the Chinese Qin dynasty, in Lagos, Nigeria.

Prince Shyllon is the joint author of a 200 page art coffee table book and a 76 page book on the Yoruba traditional art in his collection, among other publications, lectures and presentations around the world.
Prince Shyllon has selflessly donated few notable life size sculptural monuments to public places and institutions in Nigeria, among which, are the eighteen (18) life size sculptures, at the Freedom Park in Lagos, Nigeria and huge & prestigious monuments at the Universities of Lagos and Ibadan of Nigeria. At the University of Ibadan, Prince Shyllon additionally donated three sculptural pieces for the Professor Ade Ajayi garden, contributed to restoring the university of Ibadan zoo and restored the 10ft by 3ft painting (oil on canvas) of Ben Ewonwu (1952) displayed in the vice chancellor’s office.