It was held at the gallery of Visual Arts Society of Nigeria (VASON), situated inside Freedom Park, Lagos. 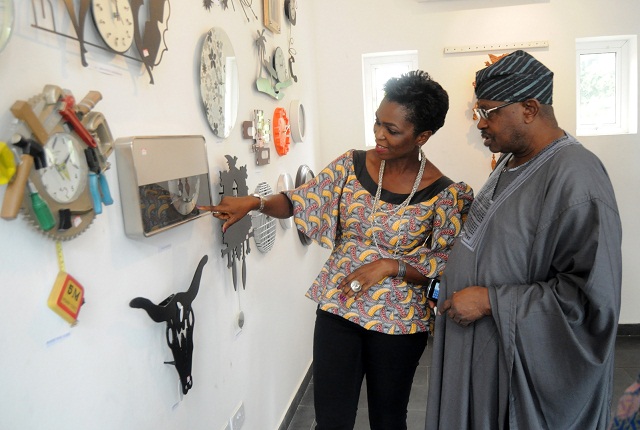 OYASAF 2013 Fellow, Ms Kimberli Gant of the  University of Texas, Austin, U.S., who is currently in Nigeria, focuses Lagos as seen through the lenses of photographers over 50 years period.

During an interactive forum with some members of the creative community at OYASAF office,  in Lagos, Gant explained what she tagged An analysis of photographic images of Lagos from 1963 to the present.
Image of Oshodi Market – Lagos, Nigeria (2008), Courtesy of National Geographic Online.

Project History.
•To conduct research on Nigerian photographers who have been documenting Lagos since Independence
•To be introduced to a wide range of photographers, both established, mid-career and emerging
•To meet photographers from multiple generations and both sexes.

Project Background
•WHY LAGOS?
1.I have been interested in the relationship between landscape images (urban & rural) and questions of cultural & national identity (both self-identification & imposed identification)
2.Lagos has been a popular a subject matter for scholars and curators in Europe & the United States since the early 2000s, but research has been very limited
3.I wanted to focus on a city within the continent of Africa to reflect my scholarly interests in Africa

•Focus in the media and academia tends to be on the following
–How the structure of the city works via urban planners and architects
–Journalists have focused on the extreme population growth over the past two decades
–Repeated images in the areas such as Makoko, Oshodi market, and specificities such as danfos and the “go-slow”

•Imagery of Lagos tends to focus on impoverished areas
•Dilapidated houses and building structures
•Images, such as Rem Koolhaas’ films, are often aerial images of the city, though some to get more intimate ground level shots
•Most exhibitions and articles on Lagos focus within the 21st century, with a few examples of the past done by Western photographers.
of the  University of Texas, Austin, U.S
Lagos by Lagosians.
•The artists I have been working with present Lagos in a much more nuanced way
–The varying forms of architecture, both past and present, that dot various parts of the city
–How the city used architecture as way to present its post-Independence modernity
–How the city has evolved over the past forty years
–Images and viewpoints from the way you move throughout the city, via the various roads and bridges
–The ecological issues facing Lagos as it develops
–The political issues that face all Nigerians, where Lagos becomes a microcosm for the entire nation.

FURTHER INVESTIGATIONS
–The various photographers’ styles
•Tam Fiofori’s influence of filmmaking in his use of sequence
•Ojeikere’s strong interest in shapes and emphasis on repetition within buildings
•Ogunfuyi’s ability to bring an intimacy to the events he captures
•Opara’s strong use of levels and clear lines
•Akinbiyi’s use of strong parallel lines, complementing his idea of the road.

Project Development.
•Research will continue on throughout the summer and academic year, as I begin to write my investigations down and find linkages between styles and content
•Upon completion of the dissertation in 2015, the project will evolve into a large-scale, group museum exhibition and catalogue
–This will include further trips to Lagos to further my initial meetings during current trip and create more relationships with other artists