The Faculty of Law building, University of Lagos, Akoka is wearing a new look with the donation of a sculpture Justice and Culture by, Omooba Yemisi Shyllon.

Produced by artist, Adeola Balogun, the Justice and Culture lady is meant to blend Nigerian culture in the dispensation of justice.
At the unveiling ceremony, the Dean, Prof Akin Ibidapo-Obe sad the whole idea behind the sculpture, "is to encourage our students that culture has a place in law," noting that "for example, our needs are not the same as the European's."

In his welcome address, the Vice Chancellor, Prof Rahman Adisa Bello, stressed the passion of the donor in the area of art and culture, of which the university’s Creative Art Department has benefited from. Extending the philanthropic commitment to the Faculty of Law, Bello said, "shows that there is a link between law and culture." 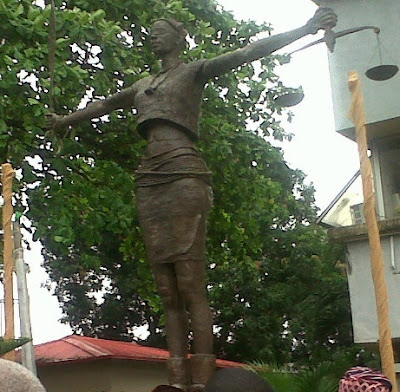 The choice of art and culture in his philanthropic activities, Shyllon explained, was aimed at preserving the people's identity. The donation to the Faculty, he added, goes beyond just a sculpture to beautify space. The donor hoped that "this would influence how we symbolise justice." Shyllon recommended: "This is Nigeria's symbol of justice."
Posted by oyasaf at 11:00 No comments:

Prince Yemisi Shyllon and Pan-Atlantic University (PAU) Ajah, Lagos, have signed an agreement for the donation of Museum of Nigerian Art.

At signing ceremony between Shyllom and PAU,  the donor stated that the proposed museum will be Nigeria's first ever  private museum. Shyllon,  According to agreement, the museum facility will be financed by the donor.

Speaking at a ceremony to formalise the donation, Prince Yemisi Shyllon explained that the collection includes traditional art, modern paintings and scuptures and photographs of Nigeria’s fast disappearing cultural festivals. The modern paintings include works by such notable artists as Aina Onabolu, Ben Enwonwu, Yussuf Grillo, El Anatsui, Simon Okeke, Uche Okeke, Okaybulu, Akinola Lashekan and Bruce Onabrakpeya, among many others. The contemporary paintings include works by Disoye Tantua, Segun Aiyesan, Kelani Abass etc. Sculptural pieces produced by Adeola Balogun, Ben Enwonwu, Oladapo Afolayan, Isiaka Osunde, Okpu Eze etc. The photographs of Nigeria’s cultural festivals are predominantly produced by Ariyo Oguntimehin. The value of the 1000 art works and 200 photographs granted to the University by Prince Shyllon is estimated at one billion, six hundred and seven million, eight hundred and eighty five thousand Naira (₦1,607,885,000:00). In addition, he is donating a further ₦100m towards the construction of the museum where these artworks and photographs will be on display as well as an annual contribution for fifteen years for the maintenance of the museum, amounting to a total donation of ₦2.2b both in cash and the value of the artworks. This donation is the first of its kind to a Nigerian University and the first donation towards establishing a privately funded public museum in Nigeria. This is also probably the first of its kind in Africa.

In his remarks, the Vice-Chancellor of Pan-Atlantic University(PAU) expressed the University’s deep gratitude for the donation. He added that the “donation of the museum is significant for many reasons: first it provides an effective way of preserving Prince Shyllon’s collection for posterity while making it available to the public. Secondly it will greatly enhance the research and educational resource of the University as well as the general public”. He further commented that PAU has a strong history of involvement with Nigerian art, citing the earlier development of a virtual museum of Modern Nigerian Art by the University. Work on the design of the Museum has already started.

For his part, the Pro-Chancellor of PAU, Mr. Pascal G. Dozie commended highly the generosity of Prince & Chief (Mrs.) Shyllon in making the donations. He remarked especially on the intention of the gift directed at both posterity and the entire Nigerian public.